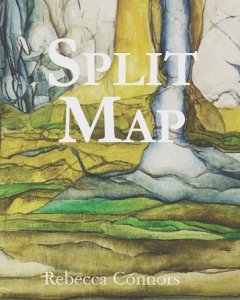 “Split Map is more than a collection of poems about coming-of-age, nostalgia, or childlike wonder, it is a journey through vulnerability into self-empowerment, and a story about how even in the most difficult of situations, female agency exists and reverberates, and how all women can dare to split maps, and thus, transform the world.”

“From the controlling and threatening father who reacts to his wife seeing his newly bare and aging face in the perfectly rendered “Aftershave,” to the unnamed “Inspector” who monitors a young woman’s words, to the reckless boy driving the car in an adolescent car crash, the men in Rebecca Connors’ Split Map, join the threats of “end times” and ubiquitous bullets in shaping the world of a girl’s journey into womanhood and motherhood. Hardly a spare word mars this powerful and memorable debut chapbook with its crystalized portraits of family. Connors forges and reimagines chilling new images as lasting symbols: the paralyzing enforced passiveness of yellow barrettes on girls in “Firing Line”; the beheading green ribbon around the neck of a woman; three dead chicks found buried in their feed where a young by has buried them, believing they would eat their way out.”

– Rebecca Morgan Frank, Sometimes We Are All Living in Foreign Countries

Purchase Split Map through Minerva Rising Press or Brookline Booksmith. Live in Boston? Get a signed copy by contacting me!